My spring trip to the Big Island of Hawaii was the first “spontaneous” trip I had taken, thanks in part to two key motivators. First, a friend of mine alerted people to Southwest opening it’s new Hawaii routes, with prices starting as low as $49 one-way. Second, another friend (and my freshman roommate), Evan, was living on the Big Island, and he had invited me to visit if I was ever around. Within a few minutes, I found a desirable date range in May, pulled out my credit card, and bought what might be the cheapest flights to Hawaii I’ll probably get in the foreseeable future.

As someone who normally likes to plan out the logistics of a trip beforehand, I was definitely apprehensive. I had no idea how I was going to get around the island, what I was going to do there, or if Evan would even be free when I was there.

Over the next couple months, I started to build out all the details: renting a car to drive around the island, Airbnbs to stay at, and an offer to stay at Evan’s place for a couple days to round out my trip. Finally, the time came to depart.

At the time, Southwest didn’t have any direct flights to the Big Island, just one flight each day from Honolulu to Kona. When I hopped off in Honolulu for a short layover, I happened to run into Diego, who was headed off on his own solo trip in Oahu!

One island hop later, and I officially arrived at my destination. Thanks to a convenient Turo car rental, I got to support a local and pick up the car in the airport parking lot, skipping the established rental car lines (and their very high penalties for renters under the age of 25).

For the first day, I had planned to spend a little more time north of Kona. Because of some flight delays, however, I arrived on the Big Island a couple hours later than I was expecting, and I knew I wanted to be in Hilo before sunset. As a result, I decided to immediately take the scenic drive around the north of the island, enjoying ocean views, thick forests, and the occasional waterfall. I also stumbled across the annual Paniolo parade in Waimea, and decided to take a short break to watch the festivities.

Despite the changes in plan, I arrived at my Airbnb in Hilo a little before sunset, and set up in the room I was renting within a plantation-style home/hostel.

Over the next couple days, I explored in and around the Hilo area. First on my list was Rainbow Falls, a very short drive from where I was staying. True to its name, the morning light at just the right angle revealed a shimmering rainbow in the waterfall’s spray.

Another exciting excursion was to the tucked-away Kaumana Caves, two lava-tube caves formed from an eruption by Mauna Loa back in 1881. Although both caves look relatively shallow at first glance, I went through a hidden entrance in one tunnel that opens up into a massive, several-mile-long cave. The hike through the cave was a lot of fun, with pitch-black stretches illuminated only by my headlamp, and the occasional tree roots and skylights in the middle of the caverns.

In between larger activities, I enjoyed walking around downtown Hilo, taking in the sights and browsing the shops. I generally got snacks and meals in downtown as well: heaping portions of loco moco from Hawaiian Style Cafe, an acai bowl from the (very Instagrammable) Magic Pineapple Shack, and some really fresh poke at the Suisan fish market.

Before I headed to meet up with Evan, I wanted to spend some time at Volcanoes National Park, which had been reshaped from the previous summer’s Kilauea eruption. I took a leisurely hike through the sulfuric steaming bluffs, walked through an ancient lava field to see some faint surviving petroglyphs, and ran into a some friendly nēnēs. These Hawaiian geese have greatly recovered in recent years, from a critically endangered population of 30 birds in the 1950s to a few thousand today.

I wrapped up my time in the park with a trip down the Chain of Craters, going from mountaintop views down to the Hōlei Sea Arch at the end. Along the way are lots of informative signs and stops at past eruptions, a reminder of the ephemeral nature of this park. 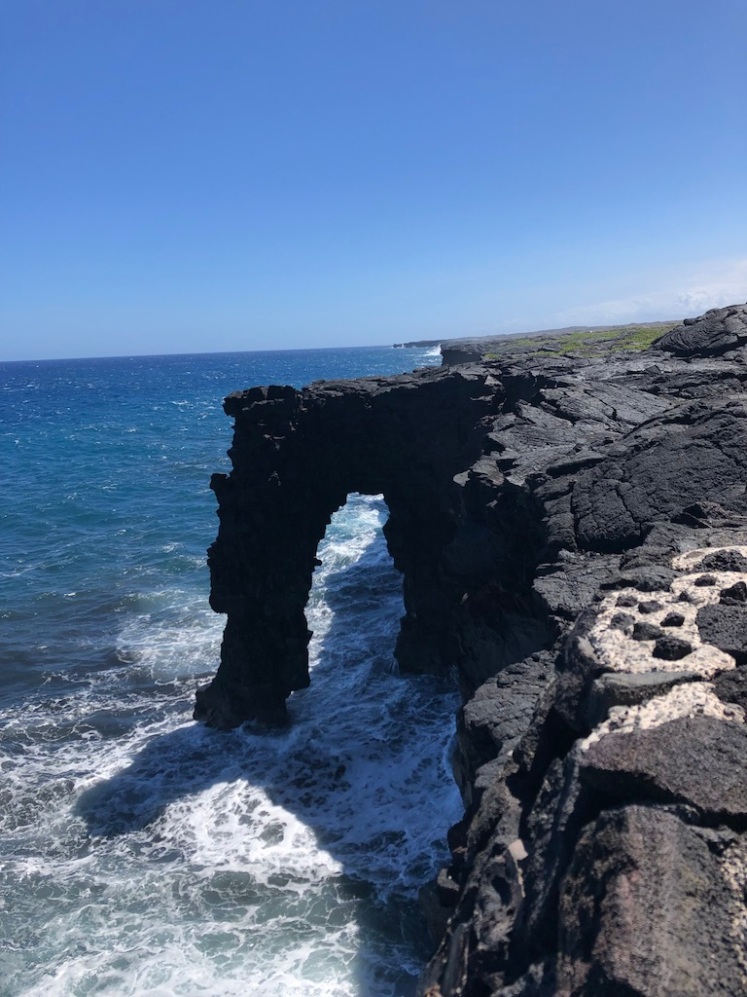 Retracing my path, enjoyed the views one more time, exited the park, and headed west to Punalu’u.

I knew I was in the right place when I spotted a truck with Evan’s signature logo on the rear (he’s running a small business right now: https://www.unkozfishing.com). Evan greeted me at the door, and we got to spend the afternoon catching up, snacking on papayas from a neighbor’s tree, and playing Catan with his three younger brothers.

Less than a mile from Evan’s place is the famous Punalu’u black sand beach, with very large turtles basking on the warm sand and a couple shops at the entrance run by Evan’s extended family (including his paternal grandma). For a uniquely local experience (and because his boat was out of commission for the next week), Evan taught me traditional Hawaiian throw net fishing, which involves throwing a circular net with a weighted rim to catch fish. Although my technique still needed work (I kept doing a “banana throw” instead of the ideal perfect circle), we ended up with a 5-gallon bucket full of fish at the end of the session. Evan also got a special record of his own, catching a very sizable omilu right off the beach with the throw net technique (a rare feat, and the first time he’s ever done so).

Our next big adventure involved heading to the southernmost point in the United States. After a delicious breakfast at the Punalu’u bake shop, we drove to the southern cliffs of the Big Island, with a 50 ft. drop straight down into the deep blue water. It took me a little longer to take the plunge than Evan or his brothers, but I eventually jumped as well, joining them for some snorkeling. Life was teeming around the cliffs, including massive schools of fish that spiraled across the ocean floor.

After we climbed back up and toweled off, we continued down a very bumpy, off-roading path to get to one of the few green sand beaches in the world: Papakōlea. With rich blue waters and tinted green sand (from weathered olivine particles) around us, we had a great time splashing around the cove and relaxing in the afternoon sun.

That evening, Evan decided to prepare a very special dish with a very special fish: two moi he had recently caught. These fish are very hard to catch, have a flaky, tasty white meat, and used to be reserved for Hawaiian royalty. We pan-fried the moi and enjoyed it together, a great way to end my last night on the Big Island.

Early Thursday morning, as I prepared to head out, Evan surprised me with one last gift: a beautiful lei his grandma had made for me to wear home. With the fragrant blossoms around my neck, I hugged him goodbye and headed off, around the southern coast and back up to Kona.

Although I made it to Kona in good time, dropped off the Turo rental with a full tank of gas, and got to my gate early, an engine delay right before takeoff left us stranded on the tarmac for a couple hours. By the time we landed in Honolulu, other connecting flights had already taken off, including the last connection back to the mainland that day.

In retrospect, getting stranded in Hawaii (and getting reimbursement from Southwest that exceeded the original cost of my plane tickets) wasn’t that bad. I ended up wandering around Waikiki, staying at a hotel that Southwest arranged for me to spend the night, and watching the sun set on my unexpected extra day in Oahu.

On Friday, things went a lot smoother. By that evening, I was back in the Bay Area, with many wonderful memories of my travels in tow.