For the past two weeks, I’ve had the incredible opportunity to go on tour to Mexico and Cuba as a violinist in the Stanford Symphony Orchestra. One thing that stood out to me during my weeklong stay in Cuba was how entrepreneurial the Cuban people I met along the way could be.

Even more impressive is the fact that Cubans operate under very non-ideal circumstances for entrepreneurship to thrive. The Cuban government only recently started opening its restrictions on private enterprise, and while I did see some people walking around with iPhones, wifi is still scarce, spotty, and costly on the island. Certainly, there are no huge entrepreneurial networks and pathways like those established in Silicon Valley – very few Cuban entrepreneurs are seeking VC funding (it’s virtually nonexistent), an “exit” (who would they sell to?), or scalability in general (Cuba is still socialist-communist, so large-scale capitalism is frowned upon, to say the least).

What, then, is my rationale behind the title of this article? While entrepreneurship today conjures up visions of powerful VC firms, billion-dollar “unicorns”, and, of course, Silicon Valley, I want to focus on the original ethos of the entrepreneur – making the most of your own talents and starting from the ground up – that modern-day Cubans embody. Here are a few things I noticed that Cuban entrepreneurs had in common:

They know how to market themselves first

One great example of marketing yourself can be seen through a trip we took to Muraleando, a community project where engineers and artists have come together to clean up one of the poorest areas in the outskirts of Havana. Together, they have transformed a de-facto land dump into a stunning two-story space for community residents and outside visitors to enjoy for free. Only after taking us on a tour, sharing with us their personal stories, and inviting us to dance on the dance floor, did they reveal that they sold items on site to keep the place up and running. If our hosts had started off by revealing the downstairs gallery where artists sold their work, or that the lead singer of the live band that just finished performing had a stack of CDs of his recordings to sell, I probably would have given a little tip and considered the rest of the objects too expensive. Instead, enamored by the space, I ended up purchasing both a CD and some art, both to help keep Muraleando operational and because those products now had a lot more value to me. I was welcomed in as an invited guest, not as a tourist, and it was this key personal distinction that tipped me towards making purchases.

Another memory involves all the people that paladares (private restaurants in Cuba) hire to try and get tourists to come dine at their place. The only person we ended up taking up on an offer to dine was also the only person to not just walk up to us and shove a menu in our faces. Instead, he introduced himself, asked us where we were from, and, upon discovering we were Americans, made some great small talk about his cousins living in Florida and his desire to one day watch a U.S. baseball game in the States. After a couple minutes, when he finally got to talking about the restaurant he was hired to promote, he offered to personally take us to a table that would fit our group, and claimed that anything not to our satisfaction would be on his tab. That willingness to vouch for a place instead of being a static salesman sealed the deal; I don’t know if he actually would have paid for things we didn’t like (everything was good, so we never brought it up), but I definitely appreciated the offer.

They know their audience

A lot of Cubans are quite proficient or fluent in English, which is a very beneficial skill to possess when talking to Americans (or Canadians, or the British, for that matter). In our increasingly interconnected world, it’s important to know how to communicate to different audiences, and communicate well, if you want your business to succeed.

Many of the quintessential 1950s-era American cars that people associate with the notion of a “timeless” Cuba are used as taxis, for example, precisely because they draw the eyes of foreigners. Although more modern yellow cabs do exist on the streets, many people want a chance to say that they rode in one of the old, fancy cars. It’s also a well-known fact that Cuban taxi drivers charge far less to other Cubans than to foreigners. Indeed, trying to get a taxi in Cuba as a foreigner is a lesson in game theory and economic price discrimination; the taxi drivers know that people who are vacationing in Cuba are likely willing to splurge a little during their stay, and many of those visitors aren’t accustomed to haggling. I had some friends get charged double what I paid for a taxi because they didn’t speak in Spanish with the cab driver, nor did they remember to settle on a price before getting into the cab. Even after arriving at your destination with a predetermined price, drivers can ask you to spare another 1 or 2 CUC (peso convertible, the currency foreigners use in Cuba) as a tip, which, since I did oblige when asked, goes to show how well Cubans can know just how much their audience is willing to pay.

Many places that the tour guides took us to gave the guides stuff for free: free drinks, free food, even some free cigars. In return, of course, those places build connections with guides who bring in business with groups of tourists in tow. Oftentimes, the tour guides will know the owners by name and be on friendly terms, having built genuine friendships that exist beyond convenient partnerships.

This tactic doesn’t always work – I wasn’t willing to pony up 7 CUC for a cane sugar drink near Hemingway’s house, for example – but when both people benefit, store owners can reap big rewards. One such instance was when our tour guides brought us to a cigar and rum shop a couple blocks away from the cigar factory we had just explored; the shop had authentic merchandise, but for far more reasonable prices than the factory’s own gift shop offered.

They are truly innovative

The arts scene in Cuba is phenomenal – little kids have complex clave rhythms down pat, musicians that perform around Old Havana are incredibly gifted, and many people join specialized arts schools in a country where the visual and performing arts are seen as viable and desirable professions. Perhaps some of that artistic vibe, combined with everyday needs and wants, feeds into the innovative ideas that Cubans are generating.

One organization that literally mixes both elements is Ballet Lizt Alfonso, which has gained international fame for its fusion of ballet and Latin American dance, been featured in Enrique Iglesias’s music video for Bailando, and whose founder (the titular Lizt Alfonso) was personally recognized by President Barack Obama for her efforts. During our tour, the Stanford Symphony Orchestra got a chance to visit Ballet Lizt Alfonso’s headquarters, as well as learn how to dance various forms of Latin American dance. It was during this time that I learned about how much work went into transforming this dance company into something that, after 25 years, now rivals Cuba’s Ballet Nacional, and has even drawn talent away from them (a couple male dancers joined after Lizt Alfonso opened up her dance company to men, for example). Lizt Alfonso’s husband, Juan Carlos, quit his job to become manager of the ballet company full time, teaching himself how to organize various facets of the business along the way. This includes scheduling performances, media outreach, and even costume creation – all clothing worn by Ballet Lizt Alfonso is made by hand in their costume department.

I’ve seen and heard of other innovations along the way: black markets arise so Cubans can obtain fruits and vegetables that are otherwise scarce due to limits on importation; paladares decorate with a hipster-ish vibe by taking objects that would normally head to landfills and recycle them into art (plus, their food is far better than government-run restaurants because they can better source raw materials); tiny shops crammed between two buildings sell items that appeal to the fantastical allure of Cuba, and constantly seek to learn what else tourists are willing to pay for. Muraleando, restaurant greeters, and those taxi cars held together by duct tape and a prayer are also forms of creativity and innovation, each born out of careful observation and individuals’ own skill sets that allow for the betterment of themselves and their community. 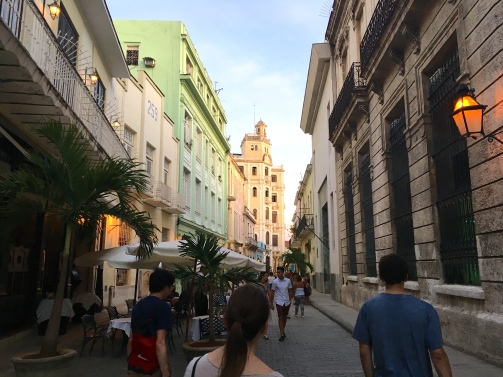 Cuba’s entrepreneurship community is very localized right now, with the ever-present threat of government officials seizing all of your property hampering large-scale enterprise. However, the small shops, restaurants, anachronistic cars, and artists all demonstrate a spark that encapsulates the basics of true entrepreneurial spirit.